May 5, 2018, Joseph Smith, a Rotary Peace Fellow studying in graduate school at ICU spoke to the NFSJ Cafe on “Sierra Leone; Seeking for Peaceful Diamond”.

Mr. Smith gave a brief history of Sierra Leone, a country in West Africa, with one of the shortest life spans in the world (according to May 20, 2016 census.) due to the decade-long civil war in 1990s and the outbreaks of Ebola* and other infections. (*WHO declared the end of Ebola transmission in 2016.)

In explaining the history, Mr. Smith referenced the film “Blood Diamond” which was set in the civil war period as an accurate portrayal of how the mineral resources caused intensive conflicts, exploitation and human trafficking. Prior to coming to Japan, Mr. Smith had been fighting for the miners’ working conditions and human rights.

Mr. Smith’s description of the abuse that took place in the mining industry was vivid, leaving one with an image that greed took precedence over safety, general welfare for the workers or simple human compassion. He described a brutal system. However, he emphasized that the situation has been improving as the country was democratized 10 years ago and is now in the process of restoration, utilizing its rich mineral resources including diamonds. In 2018, Sierra Leone conducted presidential and parliamentary elections resulting in a peaceful transfer of power from one political party to another, further consolidating the country’s commitment to democracy.

Mr. Smith is currently the Founder & Executive Director of Africa Youths on Mining and Environment. He is also the West Africa Coordinator for Independent Social Performance. (Kathy Burton-Lewis) 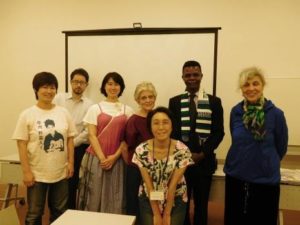