This NFSJ Café was held at Musashino Place for the screening of the documentary “Beyond the Yellow Line”. The filmmakers, Ms. Hanako Montgomery Ogawa and Ms. Tess Rizzoli, were our guest speakers. During the Q&A session after the screening, they informed the audience about prostitution and other sexual customs in the U.S. and Italy. I think the participants had a very meaningful time exchanging opinions about their confusion and awareness of these issues. 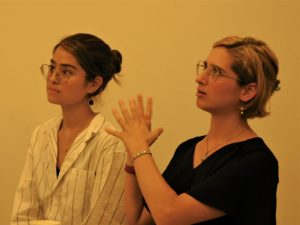 The film screened consisted of interviews conducted in Kabukicho and other areas of the sex industry. Each one of the interviewees answered the questions posed by the foreign students in a carefree manner, as if trying to justify their actions. I was impressed by this, but I was sure it was because these were research interviews with young foreign women. This would not be the case with Japanese women. Their sense of caution and embarrassment would have prevented them from answering the questions in such a direct manner. Everyone understands the embarrassing parts of their culture, and even themselves. If possible, they would not want those embarrassing parts discussed. 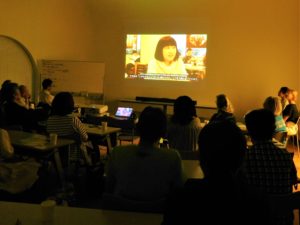 In the discussion following the screening, one participant asked, “If Not For Sale Japan shows a film that only shows the reality of sexual customs, does that mean that they endorse this kind of sex work?” However, an audience member who is making efforts to rescue victims of sex trafficking said, “The worst thing about this kind of sex industry issue is indifference. Indifference is not just a denial, but rather an affirmation”.

The film shows the naked reality of people in Japanese sex industry, which could only be realized by capturing the perspectives of foreign students. I hope you will watch this film, which is available on YouTube for anyone to see. Let’s not also be indifferent about this issue!
(Michiyo Namura)

Beyond the Yellow Line (Watch the Film on YouTube)