Before COVID-19, many foreigners came to Japan for various reasons, including to earn money to send back to their families. With the aging workforce in Japan, they have been invaluable and support the Japanese economy. Still others are refugees and asylum-seekers fleeing political or other persecution. Some members of both groups have been unfairly detained in Immigration Detention Centers throughout the country, sometimes enduring inhumane treatment.

Migrant workers and refugees are vulnerable to human rights violations and are closely linked to Human Trafficking.

So I was privileged to facilitate this cafe where we heard from Mr. Alex Easley and Mr. Thomas Ash who have spent years going to centers to visit and support these detainees.

We learned that they are allowed to visit and talk to men for 30 min. at a time, sometimes seeing up to 5 people a day. (I went once to Shinagawa’s Center and visited 2 women). Each detainee has a different story, so they listen, ask what they can bring the next time, and show/share the love of Jesus with them.

Often there were heart-wrenching stories about why they were detained, the bad conditions, the loneliness, etc.. All the cafe participants were impressed with their dedication to support these men who’ve been affected by unfair immigration policies.

Thomas has made a documentary currently being shown throughout Japan called “Ushiku”. “Based on interviews with foreign nationals detained for long periods of time at the immigration center in Ushiku City, Ibaraki Prefecture, this film reveals the violation of human rights by the authorities.” (Quoted from synopsis from Yamagata International Documentary Film Festival 2021)

I highly recommend you watch the trailer and write-up, and then see it! https://www.ushikufilm.com/en/

It will show in Tokyo again from Sept. 9th. https://www.ushikufilm.com/en/theaters/ 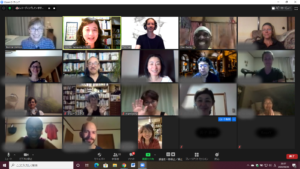