Have you ever met or been asked for help from a victim of human trafficking/modern-day slavery?

I think I have.

It was about 30 years ago. I went to Narita Airport to see a friend off to her homeland.  She was a Thai student who had been staying at my house during her study at a graduate school in ICU.

At the airport, we were spoken to by two Thai girls.  They approached Somsiri, our student, recognizing that she was Thai and asked  her for help because they were running away from someone.  They desperately wanted to go home but they did not have air tickets or passports. Somsiri needed to leave to catch her plane and I did not understand Thai at all, so I had no idea what to do.

I do not have a clear memory of what I did after that, but I think I found an airport security guard and told him something like “The girls over there have a trouble. Please give them appropriate care”, then left the airport.

Many years later, I had a chance to join a seminar led by Mariko who had just established Not For Sale Japan in 2011.  While listening to her presentation, my memories at Narita suddenly came back.  I realized and believed that they must have been victims of human trafficking and that I had left them in despair.  I can still recall what one of the girls looked like.  She had black bobbed hair, black straight eyebrows and desperate eyes.  She wore a whitish T shirt and short pants, beach sandals or cheap mules on her barefeet.

I sometimes imagine what could have happened to them after I left.  Did they have a chance to go back home? Or, did they get caught again by the brokers and taken back to brothels?  I just don’t want to imagine more than that, though it is easy for me to visualize it now because I have learned a lot about how women are treated in sexual exploitation.  If they were caught again, their hearts and bodies would have been beaten up till ragged.

They must have been no older than 23, almost as the same age as I had been.

I just wish they are alive now.  I want them to thrive in their 50s as I do here.

When I think of this, I mourn and feel pain from the bottom of my heart.  However, I stopped blaming my past self.

Now I have learned about human trafficking and modern-day slavery.  I know there are structures that cause this kind of crime in Japan. I also know that it is impossible to live our daily life totally removed from the slave labor which is happening all over the world.  I have learned that all those who are victimized have great pain both physically and mentally that are difficult from which to recover. If a victim is rescued, there are many challenges to redeem one’s dignity.

To know the truth is not always easy. I often feel shame, rage, despair and grief.  This is tough. But knowing about the reality of human trafficking gave me a kind of power to live in this society.  Now I know where and whom to contact when I come across girls like the two young women I met years ago.

I also find hope through many people and organizations who stand up to solve these problems in the world, as well as in Japan.  They do many things, such as researching, rescuing, and developing programs to help avoid being trapped in the modern-day slavery in vulnerable areas. They also cooperate with the police department and/or government officials to establish effective measures, etc.

We, Not For Sale Japan, have a purpose to abolish human trafficking and modern-day slavery. In order to make this happen, our primary aim is to raise awareness among Japanese society. We also network with other organizations and advocate with the Japanese government and private companies to take a zero tolerance policy towards modern-day slavery.  To join this movement, you don’t have to be an expert.  It is enough to have hope to see a world where everyone may live and thrive in one’s life.  So that we may see a world like this together, I want you to join us! 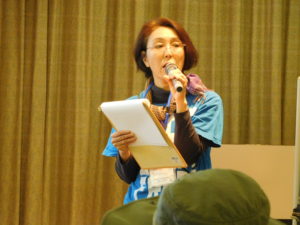