It all started from a paperback that I picked up at a small foreign books library in Kagura-zaka 11 years ago. The book was entitled “Not For Sale” which told the true stories of slavery recurring in the modern age and warned about the reality of human trafficking, taking place all over the world.

A young Cambodian girl tricked and forced to be a prostitute, an Indian family who became slave laborers at a brick kiln with all relatives because of a small amount of debt, a Moldovan single mother who set off as a migrant worker but later found herself sold as a sex slave in Italy, Ugandan boy who was kidnapped and forced to be a child soldier, a killer machine…  As a translator, shocked by these horrible stories and at the same time encouraged by the acts and words of the people who supported rescue and restoration of the victims, I decided to sell the plan of translating the book to a publisher so that I can tell other Japanese people about the issue.

It then took me 3.5 years to translate the book, but as soon as it was published by Asahi-Shimbun Press, the author David Batstone contacted me that he would come to Japan. The editor of the book and I, with other people’s assistance, prepared and set itinerary of David such as lectures, meeting with NGOs, law firm and other business people, interviews, a press conference, and a radio show appearance. David had established an organization that was also named Not For Sale in 2007 and when he finally visited Japan in 2011, he asked me to start up the Japan chapter of his organization. I decided to suspend my translator career for a while and jumped into the world of social movement where I had been a total stranger.

So this was how Not For Sale Japan started. It turned out to be one of the few organizations in Japan that mainly deal with the issue of human trafficking. But it doesn’t have an office or paid staff: all the staff are volunteers working from home. Its activities are rather slow, based on the motto of “Those who are available do what and when one can do.” However, we have managed to have more than 10 events annually and have done awareness raising activities for many people through social and other media, as well as our own pamphlets and newsletters.

Plus, for the last few years, we played roles as steering committee member of JNATIP   (Japan Network against Trafficking in Persons) and co-director of SSRC (Citizens’ Network to Build a Sustainable Society through Responsible Consumption). These involved planning, organizing and participating in conferences with the Japanese government, various seminars, NGO report contribution for international human rights committees, research for Ethical Scorecards of Companies, etc. Of course as these tasks took more time and effort, our own activities became a little rolled back. But I would say our work has impacted more on society by joining these networks.

In its regular activities, NFSJ does not have direct contact with victims of human trafficking, much less perpetrators. Most of the people we face daily are general public including students, business, and government people. “Is it actually possible to raise awareness that would truly contribute to the solution without directly supporting victims face to face?” is one of the important questions that repeatedly occurs to me.

However, I always remember what Mira Solvino, an American actress who advocates for anti-trafficking movement, said in her speech in 2011 NFS Global Forum that I attended in California: “Not so many people can really meet trafficking victims. So who tells about them, if not you?” I’m sure that it would be possible to grasp the entire picture (at least to a certain degree) of human trafficking in Japan through hearing regularly from other support groups, reading and watching news, reports, books, and videos.

It all starts with awareness. It is up to the person what he/she does after knowing, but to start with, just be aware of it. I hope NFSJ can open a door for people just like the small paperback book did for me 11 years ago.

Today, July 30, is the UN designated “World Day against Trafficking in Persons.” It is also the one year anniversary since NFSJ website launched. The top page story has not changed for the past year and still is relevant. So, I encourage you to read it, if you haven’t done so yet. Then, after reading it, please share on your social media and/or talk about it with your friends and family. Just one such action is a precious contribution for solving the problem of human trafficking.

As a director with a modest leadership, I appreciate from the bottom of my heart the support from our fellow volunteer staff, related organizations, and NFSJ supporters. Thank you, and please continue keeping our activities in mind. 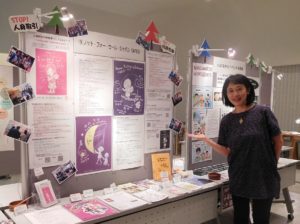